'13 proved to be a bad-luck year with lots of low points. Here they are set to music and sung rather hellishly:

Want to see some Ugly Christmas Sweater Parties in action? These can help show you how it's done!

The 2006 holiday season marked the fifth anniversary of the Ugly Christmas Sweater Party at the Commodore Ballroom in Vancouver, BC. From my extensive research, it appears that this is the earliest known sighting of this phenomenon, which is reaching epic proportions.

A popular theme for parties these days is to make an ugly sweater mandatory for entry. One invitation reads, "The uglier the sweater, the better the party." Check out Craigslist and you'll find posters desperate for cheesy Christmas sweaters.

Whether it started in Vancouver or elsewhere, we applaud this tradition, which epitomizes hellishness. Want to throw an Ugly Christmas Sweater Party yourself? Or maybe you've been invited to one and don't know what to do--after all, your holiday clothes are so tasteful that you don't have anything appropriate! (Yeah, right.) Here's a helpful guide.

1. Think Ironic. You probably have fond memories of your older female relatives at holiday gatherings wearing sweaters with Christmas trees and Santa Claus. The Ugly Christmas Sweater Party pokes fun at these wardrobe choices, and no one wants to be mean to Grandma. So mentally separate the Grandma sweater from the Party sweater. Pretend she wouldn't be hurt by the concept. And for God's sake, don't tell her about it.

2. Think Thrift Shop. Whether going or throwing, you might want to pick up some special specimens, and you won't find a better source than Goodwill. And you can't beat the prices. Just plan on spending a little extra for dry cleaning.

3. Think with a Twist. Move beyond the sweater. Add in a turtleneck,

4. Think Regional. Florida, Hawaii...not the right spots for this concept. Compromise! Hold an Ugly Christmas Tights, Sunglasses or a Hawaiian or T Shirt Party instead so no one passes out unless it's for the right reason: eggnog overdose.

5. Think Unsexy. There's nothing hot about a Christmas sweater, unless you're wearing it in Hawaii (against our excellent advice). No bare midriffs, especially on guys.

6. Think Prizes. Kick it up a notch and add a contest to the mix. And what do you give the partygoer with the uglist, tackiest, most heinous Christmas sweater? How about Christmas socks ? Or everyone's favorite: Fruitcake!

‘Tis the season not just for shopping and overeating but for committing to a health insurance policy. The Obama administration just announced a one-day extension of the registration deadline, tacitly advising Americans to spend Christmas Eve selecting a policy that's the least of deductible and provider-choice evils. Ho ho ho.

I’ve spent hours this month on Covered California as well as numerous insurance company sites. I was trying to find a policy that includes Cedars-Sinai Hospital as a provider. Not so easy. Apparently Cedars, the best hospital in town, is also the most expensive, and no insurer wants to subsidize the highest quality. Only the second-rate, the mediocre, merit funding.

When Clinton announced “Don’t Ask, Don’t Tell” as a military policy, it was groundbreaking. Imperfect, but a step forward, a step leading to the current gay-friendly policy. The Affordable Care Act, too, is a step forward. Unfortunately, that fact is being obscured by a poorly handled roll-out and the fact that insurance companies still hold almost all the power. But without this agonizing, infuriating, hellish step, 20 years from now there will still be families losing their homes over hospital bills. The first step is the hardest, but don't take it and you'll never reach the finish line.
Posted on Monday, December 23, 2013 No comments: 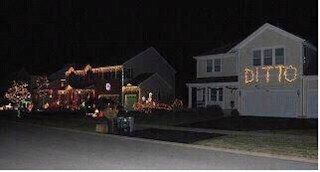 I love this lazy approach to Christmas decorations.
Posted on Thursday, December 12, 2013 No comments:

Wonder why this holiday song never caught on...