Nothing Like a Bomb Threat to Screw Up New Year's Eve

A story contributed by Steve (who usually works behind the scenes here):

I was closing out 2008 with a pleasant week snowboarding in Snowmass, Colorado. Many evenings we would go into nearby Aspen for a nice dinner but we figured that we'd stay away from the crowds New Year's Eve and just hang out in our condo. My son had other ideas and said we just had to do something "New Year's Eve-y". Little did we know that this was not to be a typical New Year's Eve, in Aspen at least. 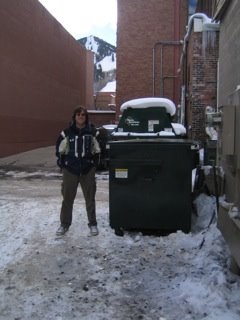 To my son's credit he did his research and discovered that there were fireworks scheduled over the slopes above Aspen at 8:30pm and midnight. We bundled up, got into our rental car, and headed over to Aspen, about 20 minutes away.

When we arrived, flashing lights of police cars and fire trucks could be seen at a few intersections. This didn't immediately concern me since I'd read how the Aspen police force would be out in force quelling any bar fights and looking out for underage drinking. We soon learned that these would be the least of the police force's concerns.

A friendly but professional policewoman was the first to inform us of the bomb threats made at two Aspen banks earlier that day. As the bomb squad dealt with the bombs, the most popular section of downtown Aspen was completely evacuated. What started as our quest to see explosions in the sky quickly turned to a desire to get our butts away from any explosions on the ground. We hightailed it back to our condo where we followed the story's progress on the web. 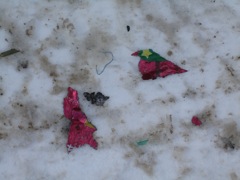 Unfortunately, the bomb threat was real and four gasoline bombs were discovered and safely detonated by the bomb squad. New Year's Eve is Aspen's second busiest night of the year (after the Fourth of July) so the evacuated businesses and workers took a major hit in lost revenue and tips. Fortunately, no one was hurt and the town of Aspen carried on and put on their fireworks shows on New Year's Day evening. This was my first New Year's in Aspen so I have nothing to compare to, but I suspect the New Year's night revelers were even more raucous during the fireworks. In the back of our minds we all knew we had dodged a bullet (or bombs, as it were).

Please share your thoughts! All comments are moderated. Happy Hellish!